June afforded a nice break in the year for a short visit to a long-time good friend, Lee. Our plan was to hike as much as possible in the beautiful country surrounding Spokane, and it was a joy from beginning to end.

As usual, the weather was perfect: lows in the 50s at night, and the high 70s during the day. Upon arriving, and after we had a quick nosh at the house, Lee and I took off for a short hour’s walk in the Dishman Hills, a green and scented trail that cleared the mind and really got us prepped for some a little more challenging as the week progressed. Between the fresh air and good conversation, it was a nice way to begin our journeyings. 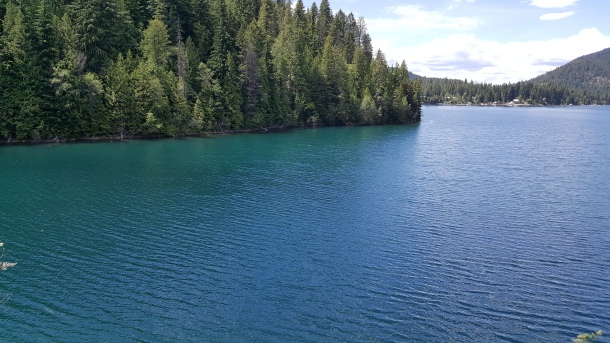 Wednesday morning, up with the larks (are there larks in Washington?) we had a quick breakfast, checked what was happening with the Brexit vote, then got in the car headed to Bead Lake, about a 60-minute drive all told. The weather was perfect. Once we arrived, we ran into a slight problem: We couldn’t find the trail marker to start our hike. Our map stated “Forest Road” but we drove and drove, and no Forest Road appeared anywhere.

Lee on the trail

We decided to drive up an unmarked trail uphill which, as it went on and on, became narrower and narrower and higher and higher, with a particularly steep drop on the passenger side of the car – my side! And still we couldn’t find a trail marker, and had to turn around – no easy feat, considering the width of the trail by that time was about an inch (just kidding, but it was narrow.)

So our next stop was at the boat launch…where we met a delightful 77-year old man (he gave us his age) and his dog, Gordo. Don’t ask me why I didn’t ask his name…but anyway, he and his dog lived in a caravan at the lake’s edge, and apparently he walked three different trails every day. Was he ever in good shape – as was Gordo!

So we finally found the beginning of the lake trail, and had a great hike for approximately three hours. It couldn’t have been more picturesque…the trees, flowers and the brilliant green-blue of the glacier-like water…it was like a painting, and the air was so crystal clear, inhaling was just a pleasure. We could not have had a better time…

After this, we came home hungry, and drove downtown to a terrific African-themed restaurant, the Safari Room in the Davenport Tower. The grilled salmon was delish, and the Ginger Dragon – a potent drink composed of vodka, ginger liqueur and some other liquids – was fabulous. And so to bed!

Thursday was a completely different experience – Palouse Falls, a throwback to the Ice Age, whose spectacular terrain had been repeatedly scored and eroded by floods thousands of years ago. The crevices, canyons, waterfalls and rocky outcrops and trails were a fascinating sight…standing atop the cliffs, you could see for miles around you. 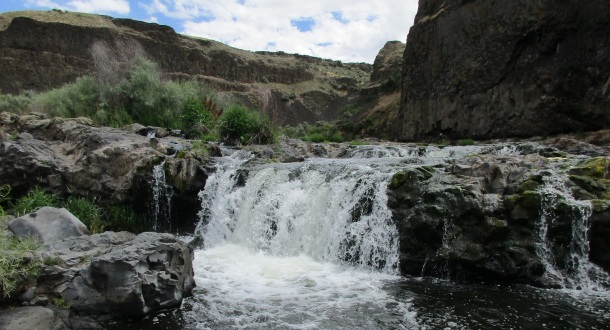 This was our most challenging hike, for more reasons than terrain.

An hour into the hike, I heard a “flap, flap” as I walked and thinking it was something stuck to the sole of my boot, paid no attention at first. 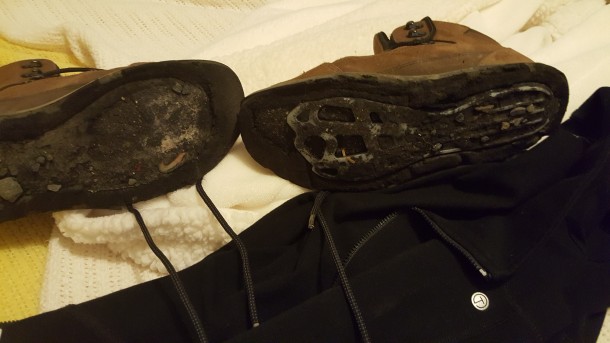 As it turned out, something was stuck to the sole – a fragment of the boot! And a little later, there went the other sole – so I sat down a la Cheryl Strayed, and peeled off both soles. Luckily, there was still a liner in each boot, so I was able to continue to hike with no real problem.

Rocky roads: the trail down to the bottom of the cliffs

Halfway around the trail, after this little contretemps, we came upon a rattlesnake…rattling away, enjoying a little sun in the middle of the road. Coming to a screeching halt, we waited extremely quietly; eventually the rattler slithered off into a crack in the rocks.

Our next challenge was getting down from the cliffs to the ground below…the trail was covered in scree and rocks – one slip and you could easily turn an ankle. Thank god Lee provided me with two hiking poles, which were an immense help in navigating some of the more difficult areas. We got to a flat boulder bed by the river, and sat for lunch. 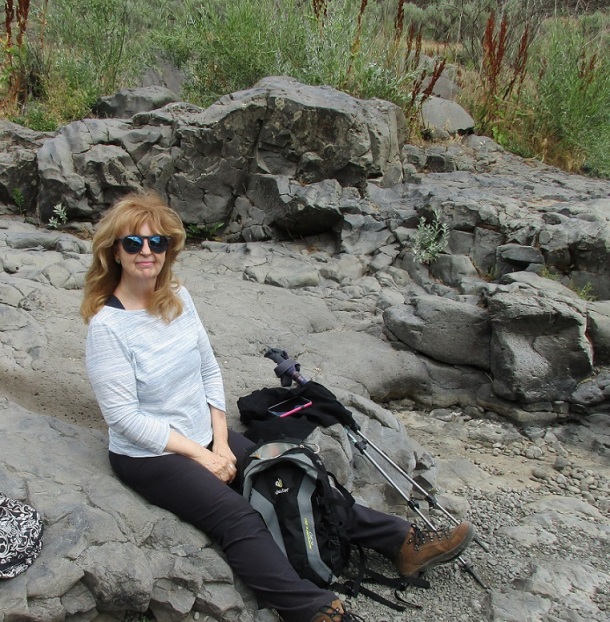 It was at this point I discovered that my cell phone – thoughtfully stowed in the pocket of my jacket – had smashed against one of the boulders. Thankfully, it had a protective cover, so although it looked bad – actually it looked like a splash of guano – it still worked, and the camera wasn’t damaged. Ergo…it continued to take great photographs. 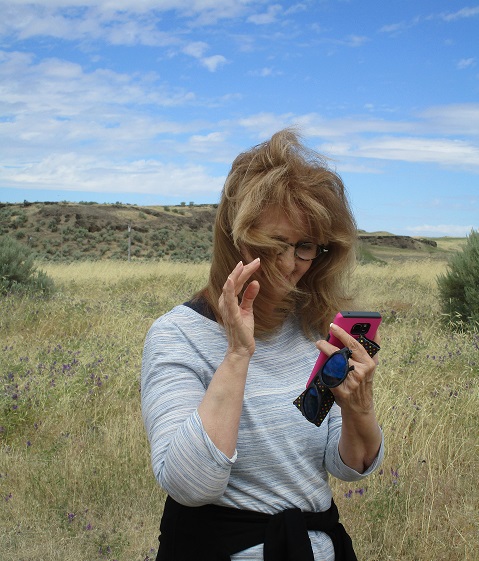 All around us were spectacular waterfalls, boulders and cliffs…it was here we lunched, with a weather eye out for snakes, and then got on with our hike. Spectacular is the only word for it.

And then it was on our way back to the house – a drive of about two hours through farmland full of beautiful green fields, yellow wheat fields, rapeseed and countryside. What a great day! 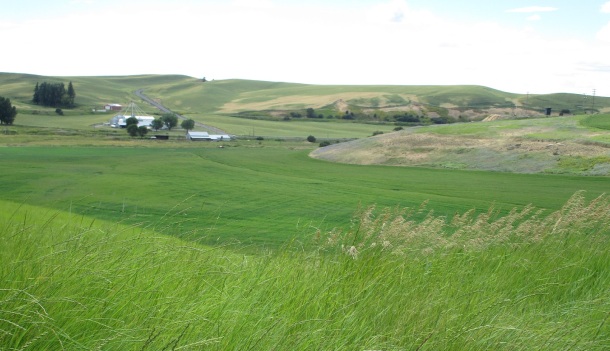 Green, green fields on the way back to Spokane from Palouse Falls

We ended it by stopping to pick up a marvelous crispy crust Meditteranean pizza filled with spinach, chicken, cheese and garlic sauce –why does food taste so much better on trips?

Our next little adventure, on Friday, was into Idaho – Coeur d’Alene – which has always sort of fascinated me (the name)….the only day it rained. Since it rained and kept on raining – in Houston, you’d barely call it rain, but it did pretty much soak the area – we didn’t have a chance to hike. So we stopped in at a beautiful hotel, the Dockside Resort,  and had a yummy lunch: salmon, Golden Four-Cheese Dip, and quesadillas! Guess you could say eating and hiking our way through this trip – totally worth it! The restaurant overlooked the water and one of the world’s largest floating boardwalks. A lovely afternoon was had by all!

At the Cheney Water Treatment Center

Two short hikes and a quick walk through one of Spokane’s beautiful parks was on the agenda for Saturday. The Cheney Water Treatment Center may not sound like much of a walk, but we were surrounded by such beauty…ponds and small lakes, reeds, trees, flowering plants and wildlife aplenty.

After an hour wandering around the center, we drove to Hog Lake – not a particularly appealing name, but actually a very pleasant walk on trails through leafy green country. 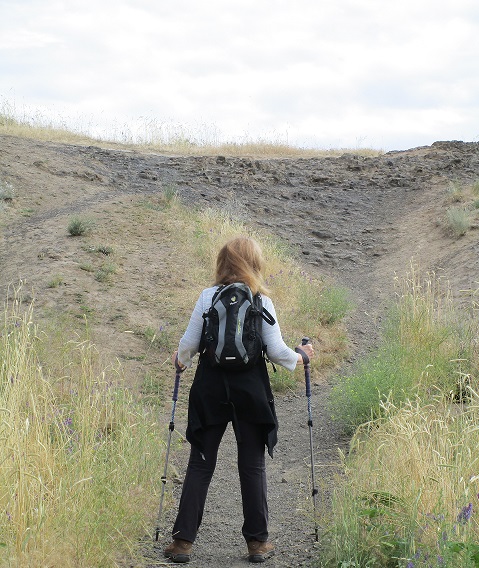 On the way back to the house, we noticed a small grass-green park that looked as if it had a lot of promise. Fronted by a wide grassy stretch of lawn, the trails led through tree-shaded paths, up inclines bordered by huge boulders, and through flower-filled glades. Just beautiful…a fitting end to the day. After which, we drove to a small neighborhood restaurant for dinner, and an early night back home.

Saturday in the Park with Ro and Lee

Sunday it was back to reality…an early plane ride, and a full day’s travel through Chicago until my toes touched the Houston earth. From the cool green of Spokane to the heat of Houston’s summer. Thank god for air conditioning!!